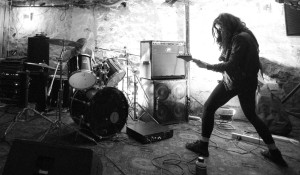 In new single ‘KYMS’ the duo rage against the relentless pollution of our planet, the song inspired by a hatred of those who continue to defile and pollute the earth.

Music News have an exclusive premiere of the KYMS video here!

October’s mini-album ‘Eat Hate Regurgitate’ includes both ‘KYMS’ and previous single ‘Sick’.  Pre-release CDs will be available at the UK shows and then by mailorder from our online shop.

Show the band some UK love at these: