Digital Space is the new single by Futur Primitif, the band featuring songwriter and singer Daniel Lefkowitz, former member of American indie-folk darlings The Low Anthem. Daniel (voice/guitar) is joined in Futur Primitif by Jared Elmore on synths, drum machine and a large mess of cables. Their forthcoming album Machineteeth was recorded live with a full band comprised of members of The Low Anthem in the Columbus Theatre in Providence, Rhode Island, and produced by Ben Knox Miller.

Now signed to Integrity for European releases, Futur Primitif’s second single from the album is Digital Space (INT 040), out on 6th May 2013, and follows debut track Nuclear Shockwave which featured on BBC 6 Music, XFM and Amazing Radio.

Upon leaving The Low Anthem, Daniel dropped out for two years, living in a yurt in rural Arkansas where he gave up creature comforts in exchange for a more direct connection with the natural systems. Since then, he’s been attempting to reconcile this more intuitive lifestyle with the surrounding globalised digital world. Digital Space is about the confrontation of man and his manufactured environments — in particular the homogenised identi-kit high streets which feature so heavily in most towns and cities.

Both the artwork for the single and its video feature the intriguing work of up-and-coming Ashville-based muralist, Phyliss Vanilla. 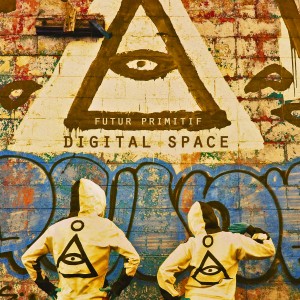 Futur Primitif is currently an electric duo, incorporating elements of Velvet Underground era rock, sparse folk, and a fearless approach to the wall of sound. Live UK dates in May will be followed by a further tour in September including an appearance at the End of the Road Festival in Dorset.